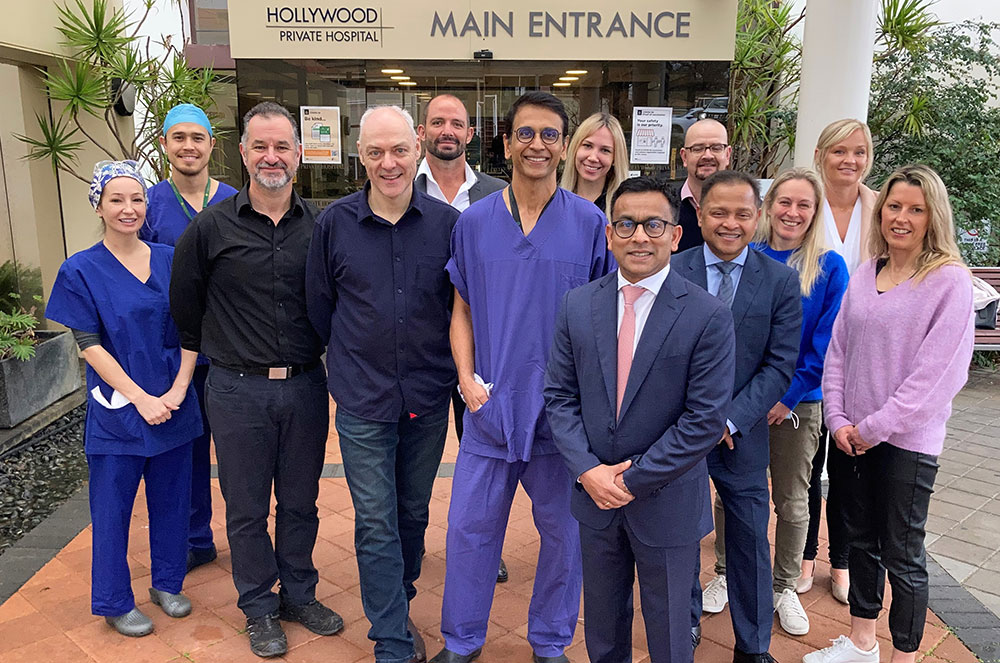 Hollywood Private Hospital is set to become a training and education hub in Australasia for the specialist heart procedure Hybrid Catheter Ablation and Surgical Ablation (HyCASA).

Cardiothoracic Surgeon Pragnesh Joshi and Cardiac Electrophysiologist Rukshen Weerasooriya are the only practitioners performing HyCASA in the southern hemisphere and are expected to train 12 teams in the next 18 months.

The first team to train were clinicians from Peninsula Private Hospital and Monash Medical Centre in Melbourne. The team visited Hollywood on July 28 and 29 and included a cardiothoracic surgeon, two electrophysiologists, an anaesthetist and a scrub nurse. They watched the two surgical procedures in theatre and then discuss HyCASA with Professor Weerasooriya.

HyCASA is a keyhole minimally invasive surgery performed on a beating heart. It is for patients with long-standing persistent atrial fibrillation (AF or Afib).

Atrial fibrillation is an abnormal heart rhythm caused by erratic electrical signals in the heart, and affects about two per cent of the Australian population.

Hollywood is one of the busiest providers of HyCASA outside of the US, with more than 80 patients treated in the past three years.

The experiences and outcomes from the Hollywood team will be delivered via podium presentations at Australian and international clinical conferences.

Prof Weerasooriya said a comprehensive HyCASA training program is important to provide AF patients with increased access to the specialist procedure across Australia, New Zealand and the Asia Pacific.

“All participants need to be fully briefed on a new procedure for optimal outcomes for the patient,” Prof Weerasooriya said.

In 2017-18, atrial fibrillation accounted for more than 72,000 hospitalisations in Australia and nine per cent of deaths were associated with the condition in 2018.1

Most patients considered for HyCASA have persistent AF (AF that lasts continuously for more than seven days) or previous procedures have not been effective.

It is estimated almost half of AF patients have long-standing and persistent AF.

“These are the patients with the most debilitating levels of Atrial Fibrillation where no other therapy has proven successful,” Ms Hall said.

“Given Atrial Fibrillation is a growing epidemic in Australia patient access to HyCASA is essential.

“We would like to see more surgeons being trained in HyCASA so that it is accessible for all patients, in all states across Australia.”

Hollywood Private Hospital CEO Andrew Tome said it is the mission of Hollywood to offer new and innovative therapies for patients who have had limited options in the past.

“We are proud to support specialists in their clinical research and technique development,” Mr Tome said.