A four-year-old boy has become the first patient in Australia to receive a custom 3D printed ear implant.

The surgery has only been completed 16 times across the world.

Dr Dusseldorp said: “He is really quite advanced for his age and he was asking his mum, ‘Do you think you could get me a big ear’ and that is what inspired his mum to go looking for new treatments.”

Maxim was born with microtia, a condition which caused one of his ears to be underdeveloped.

Microtia is known to affect one baby in every 6,000 births in Australia and can often cause hearing and psychosocial issues.

“It is not that uncommon, but it is still on the rare end of the spectrum. A lot of kids have psychosocial concerns about it and that is something we try to alleviate by reconstructing them a new ear,” Dr Dusseldorp said.

An optical 3D scan of Maxim’s other ear was entered in to the 3D printing software and flipped to create a model for the ear implant.

It was then 3D printed using a biocompatible material known as porous polyethylene, wrapped in a living tissue overlay and covered with skin grafts.

“What is great about the computer design process, is that families can be involved, they can see what we are planning to do, and they can give their tick of approval. It makes it a positive experience for everyone,” Dr Dusseldorp said.

Traditionally, ear reconstruction has been performed using rib cartilage, which is harvested from the chest wall and then sculpted in to the shape of the other ear.

This sometimes-painful method is performed after the age of 10, requires at least two stages and can fail to resemble the delicate features of an outer ear.

“I was quite amazed by the difference between this new technique - where the patients have minimal pain when they wake up and are home the next day – compared to the rib technique which requires several days in hospital with drains and pain killers and takes at least two surgeries,” Dr Dusseldorp said.

Both surgeons involved in the procedure have undergone post-fellowship training in ear reconstruction overseas and collaborated with leading surgeons in the USA - Dr John Reinisch and Dr Sheryl Lewin - to learn the new technique.

The procedure is considered low risk with only a 1% major complication rate. It also offers better outcomes for children, including a more realistic looking ear, less pain, less time in hospital and it can be completed at a younger age.

Maxim is recovering well at home in Brisbane, and doctors are monitoring his progress.

Dr Dusseldorp said: “His mum told me the other day that Maxim asked her to print out a photo of his new ear and put it up on his bedroom wall because he’s so proud of it.”

“So that was really heart-warming when you realise how much it means to him,” Dr Dusseldorp said. 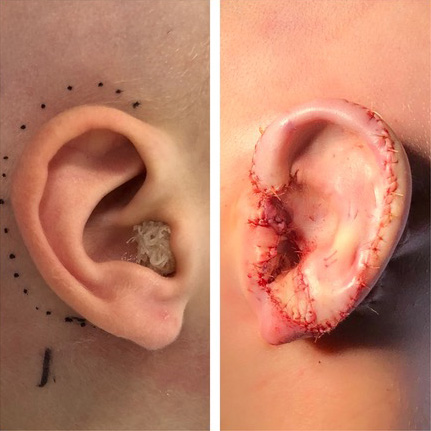