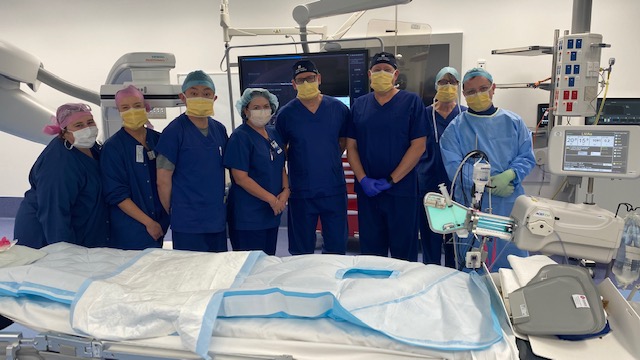 The $3 million hybrid theatre has been custom built as a combination cardiac cath lab and an operating theatre. It allows the team to progress a routine case into a more complex case during the same operation, in the same theatre.

“The hybrid theatre is larger than a usual cath lab and allows for more specialised equipment. For example we can abort a strict cath lab procedure and progress to a bypass operation without needing to switch theatres or have the patient return for surgery on another day,” Ms Neylan said.

“It’s a real draw card for surgeons because of that flexibility and it allows for a better workflow with anaesthetics, vascular assistants, diagnostic cardiologists and a larger nursing and radiographer team.”

The TAVI procedure is a minimally-invasive alternative to open heart surgery for patients suffering from severe aortic stenosis. The narrowed aortic valve is replaced using an artificial valve delivered via a catheter placed through the femoral artery in the groin.

Doctor Smith helped establish the TAVI program at Greenslopes Private Hospital and said he was proud of the team effort to reach the 250th case in just three years.

“I think it’s a big deal - I’ve been a cardiac surgeon for 20 years and I’ve seen quite a few new techniques come and go and I don’t always take on everything new. But when I first saw TAVI, I thought it was really the way of the future,” Dr Smith said.

“TAVI is not for everyone but is an important part of the treatment modalities that we have available for severe aortic stenosis. Initially it was used for patients who weren’t suitable for surgery and were otherwise destined for palliative care. But the indications have now progressed and in coming years I am sure we will be offering TAVI to more and more patients,” he said.

“I’m so excited to be involved with the TAVI program at Greenslopes because it represents a new era in cardiac services utilising a specific ‘heart team’ approach. It’s a collaboration of the two specialities - interventional cardiology and cardiac surgery.

“It’s a really happy team and everyone pulls together to make sure we have the same goal - and that’s to provide the best outcome for the patient,” Dr Smith said.

For more information head to www.greenslopesprivate.com.au.